After ten vibrant and successful years, PAL’s creative community is getting noticed! Special thanks go to publicity wiz Ellie O’Day, and our local broadcasters, news reporters, and entertainment journalists!

Thank you Rick Cluff and Margaret Gallagher of CBC’s Early Edition for strolling PAL’s hallways, garden and theatre, meeting our residents and learning how, we’re an enterprise. “At PAL we roll up our sleeves and get this ship moving.”

The Vancouver Sun’s Glenda Luymes interviewed Ellie O’Day to learn why PAL started why we are a success. To read the article Advocacy group vows to provide more housing for Vancouver’s senior artists click here.

The Vancouver Fringe Festival’s Hannah Bellamy wrote a great article about the origins and need for PAL in the widely distributed Theatre Wire. To read the article Affordable Housing and the Arts including a video please click here. 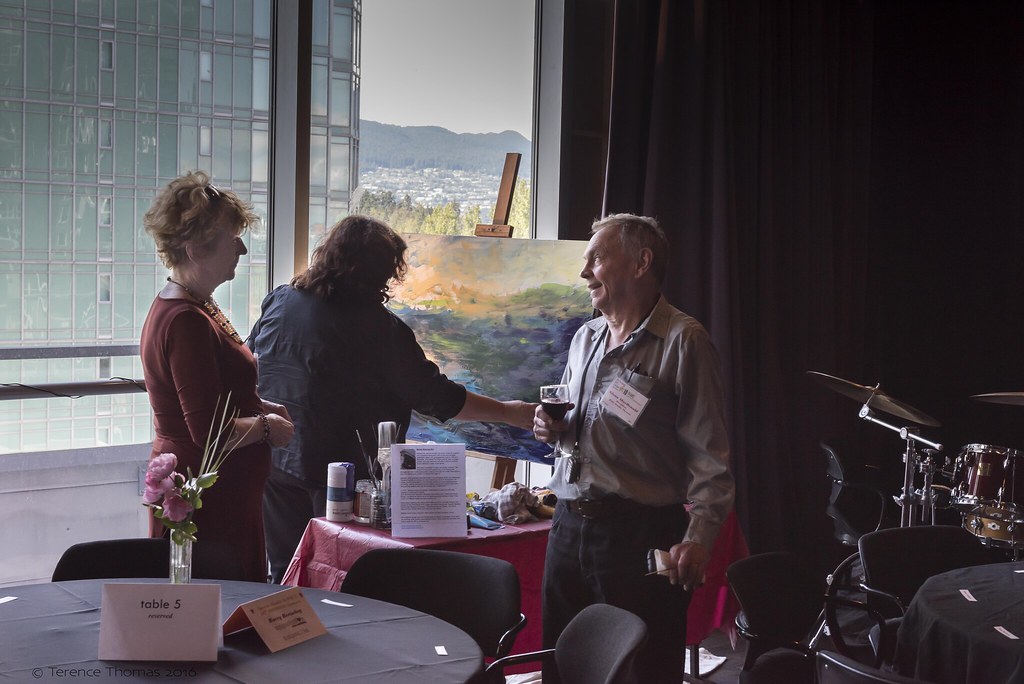 On Sunday, May 29th PAL Vancouver celebrated its 10th Anniversary milestone. An innovative social housing development built on land provided by the City of Vancouver on a 60-year lease in the downtown core, PAL provides housing for long-standing members of Vancouver’s performing arts professions.

Though PAL Vancouver is rightly proud of their ten years in operation, they are concentrating on future growth in order to address a real need within the arts professions for affordable housing.

“PAL Vancouver serves an important role in providing affordable housing for those whose art often leaves them with few means later in life,” says Gary Glacken, executive director. “Though professional artists enrich our lives, in many cases their own security is put at risk. Our waiting list for housing tells us we have more work to do to find new housing.”

May 29, 2016 marks exactly ten years since residents began to occupy PAL Vancouver, with an official opening ceremony featuring then Premier Gordon Campbell and former Mayor Sam Sullivan taking place the following year. A celebration will take place this Sunday to thank everyone in the philanthropic community, in all levels of government, and the many volunteers over the years that have allowed PAL to thrive.

Our 10th anniversary celebration begins a series of events to mark PAL Vancouver’s decade in operation. “We have a busy calendar where PAL will be highly visible in the community, including a Canada Day celebration, a float in the PRIDE parade, and other appearances,” adds Ellie O’Day, PAL resident and member of the society’s board.

Several awards will be given at the ceremony, including the new Jane Heyman Award for Exemplary Service, named after PAL Vancouver’s co-founder. In addition PAL is giving a special recognition — the 2016 PAL Innovator Award — to Hon. Rich Coleman for ten years of public service on the housing portfolio.

In an inaugural speech in 2002, co-founder Joy Coghill expressed the need for such housing when a colleague passed away in a basement suite in a suburb, far from her community. Her friends, along with co-founder Jane Heyman, resolved to not let this happen again.

People in the performing arts often earn less than $20,000 a year, and as seniors, often less than $10,000. Performing artists often have diminishing work opportunities once reaching middle age, with years yet to wait for their Old Age pension.

We hear about optimum conditions for helping seniors to live healthy, active, involved lifestyles. PAL’s mandate was to create secure housing with community and creative options. From the week we moved in, PAL residents have put on shows, devised fundraising projects, helped neighbours, launched a Monday Soup Social, and formed committees to manage our library and our garden. PAL Vancouver has a theatre and beautiful rooftop garden on the 8th floor, and shares space on our second floor with Bayshore Gardens Daycare. The theatre is available for rental, as well as providing space for performances and rehearsals by our own residents.

Despite the pressure on housing in Vancouver, PAL committed to providing housing at 33% of income to qualifying residents. A smaller portion of our suites are rented at near-market rates, helping to underwrite the others. Twelve PAL Partner Suites are on life-leases; these have two bedrooms, fireplace and views of Coal Harbour. The other 99 suites are one-bedroom rentals.

PAL has supported these residents with help from our professional associations – UBCP, ACTRA, BC Council of Film Unions, DGC, Actor’s Equity, IATSE 891– as well as Theatre Cares and individual donors. We receive no operating support from any level of government. Our current waiting list is longer than our list of residents. PAL Vancouver is now looking for partnerships to launch a PAL 2 to accommodate this need. With the foundation we created in building and sustaining our current building, we feel PAL Vancouver would be an ideal non-profit housing partner.

Members ring in the holidays at PAL’s AGM!