And here we are.

Before I begin I would like to recognize Adrian Luces, the executive director of PAL Canada, who has flown here from Toronto to attend our ceremony. Adrian has convinced me to join his board so we can bring some of our B.C. mojo to the national organization.

Four years ago this month, the PAL Vancouver board met for the first time since I had taken on the role as chair. Up until that time, an immense amount of work had taken place under the leadership of my predecessor Lori Baxter (who emailed me last night to send her regrets about not joining us today); this included updating PAL Vancouver’s mission, governance and policies to make our charitable society strong and sustainable for years to come.

Yet in spite of those efforts, one large challenge remained: we had a waiting list of nearly 100 applicants who wanted to live in our building in Coal Harbour, and we had nowhere to house them.

So, I asked our board to indulge me on what would then seem like a wild idea. That wild idea was that within a year we would have an agreement in place toward establishing new housing for PAL.

And as it would happen, we succeeded in that quest. By the end of 2016 we were in very serious talks with our partners here today. Yasser has done a terrific job of discussing the work behind the scenes to make this important partnership happen, and I thank his partner Richard Wittstock and their staff for their unwavering commitment to making this project happen.

PAL Vancouver was also a dream that became reality. Our beloved co-founders Jane Heyman and the dear late Joy Coghill are two of the most tenacious people I have ever met in my life, and there would have been nothing that could have stopped either of them in making PAL Vancouver happen. I will shortly invite Jane up to provide a few words.

I’m thankful this is not the Oscars and there is no band to play me off the podium because I have a lot of people to thank.

First of all, thank you to the Honourable Judy Darcy, New Westminster’s MLA and also the Minister of Mental Health and Addictions. It is fitting that someone with your important portfolio joins us here today, given that it is the scourge of social isolation that is at the root of so much mental and physical decline. PAL is committed to ending the social isolation many face in our community.

I must acknowledge many of your colleagues, including the Honourable Lisa Beare, Minister of Tourism, Arts, and Culture, who is quoted in our news announcement. As well, Vancouver-West End MLA Spencer Chandra-Herbert, who is our MLA in Vancouver, and a longtime active supporter of ours. Spencer was double-booked at this time but sent us a lovely letter that we’ll post on our website at palvancouver.org.

We must thank Minister of Municipal Affairs and Housing, the Honourable Selina Robinson, whose office oversees BC Housing Management Corporation. I’ve known Selina for many years now, and like Jane and Joy, she’s as bound and determined as anyone in high office I’ve seen when it comes to addressing housing affordability.

And of course, we thank the guy at the top, Premier John Horgan. The Premier sent us his best wishes, which we will also make sure is posted on our website.

We have the City of New Westminster to thank, including Mayor Jonathan Coté, Acting Mayor Chinu Das and her council colleagues for supporting this development. When I first sat down with the mayor to tell him about PAL, he didn’t have a beard, so we send him our warmest regards.

PAL Vancouver is committed to becoming a strong member of the New Westminster community, and we are making provisions for local members of the community as part of our resident applications. I’d like to thank the community members Russell Roberts and Colleen Winton, who supported PAL’s housing proposal.

Yasser mentioned Gary Pooni from Brook Pooni Associates, who are represented here by several of their staff. It was Gary that cooked up the idea for this partnership when we first met and gabbed for two hours.

I mentioned BC Housing earlier, but in particular I want to recognize their amazing staff members Michael Flanigan, Armin Amrolia, CFO Dan Maxwell and their boss Shane Ramsey, as well as the BC Housing board. The creativity that goes into their work is amazing, and our province should be proud to have an institution like it.

It was so exciting to be on hand with @palvancouver for the groundbreaking of the new PAL Housing Project to provide 66 units of #AffordableHousing in our community.
These homes offer new opportunities and hope for performing arts professionals and senior artists in #NewWest! pic.twitter.com/kAIUjgorjv

PAL Vancouver are extremely grateful to our partners at Vintop Development Corporation — Luning Yu and Tracy Dong. Thank you both.

Now I have the important job of recognizing many of the incredible people behind PAL Vancouver. This includes Gary Glacken, our executive director, and Karen Woodman, who looks after all of our philanthropy among many other tasks. Karen has been bombarded by communication for several weeks now and has never flinched. Also, thanks to Latisha MacGregor, Astrid Sars and Gwenda Lorenzetti who round out the team.

In addition to past president Lori Baxter, I want to recognize another past PAL president Tony DuMoulin who is here with his wife Lynne. As well, thanks to former director Terence Kelly.

We thank all those from our incredible donor community who have supported PAL Vancouver for so many years, including:

I cannot forget the amazing Phil Boname, our first board president and longtime supporter. As well, Dr. Yosef Wosk, our PAL Vancouver Patron.

The first significant gift for PAL New West comes from Marjorie Saint, the executor of her sister’s estate (Barbara-Jean Saint). They grew up in New Westminster and wanted to support the new PAL building.

PAL Vancouver exists because of their generosity, as well as our many union partners, including the Union of B.C. Performers, IATSE 669, Vancouver Musicians’ Union, Directors Guild of Canada, AFBS, and I want to thank IATSE 891 and Teamsters Local 155 for supporting our transportation needs for PAL residents today.

Finally, I want to thank my fellow board directors past and present during the past seven years.

First of all, Ellie O’Day. Who’da thunk that a young rock radio fan like me would one day get to work with the great Ellie O’Day?

Thank you, David Adams, a New West resident, for all your support of PAL Vancouver through the years.

Thank you, Bill Cox. Our treasurer who put PAL Vancouver on a strong financial footing, and who has been with us during every step of the PAL New West partnership.

Thank you, Liz Shorten. You have been an amazing supporter and advisor. Same goes for Sharman King and for Glenn MacDonald — thanks to you both.

Thank you, Dusty Kelly, a PAL resident and someone who has made amazing things happen in her short time on the board.

Chris Patrick could not be here today, but he has been with me on this seven-year journey and I have appreciated his incredible dedication to PAL Vancouver.

Thank you to our UBCP rep and my new friend Jackson Davies. Again, how does a kid who grew up in B.C. get so lucky to work with a member of the Beachcombers cast?

Thank you too to current directors Cal Shumiatcher and Martin Kinch.

And thanks to all of you, who have attended. I think by now you probably wished there was a band to start playing.

Audio: Affordable housing for those in the performing arts world – CKNW 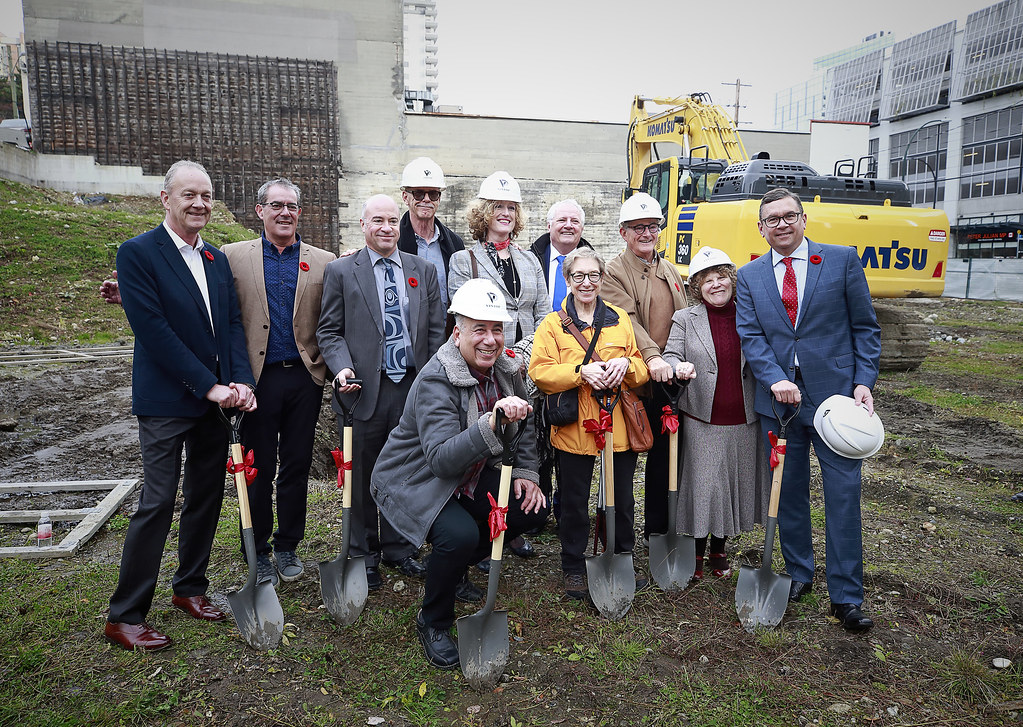 New homes on the way for arts and culture professionals in New Westminster Members ring in the holidays at PAL’s AGM!

Members ring in the holidays at PAL’s AGM!